The capacitor is a component which has the ability or “capacity” to store energy in the form of an electrical charge… In its basic form, a Capacitor consists of two or more parallel conductive (metal) plates which are not connected or touching each other, but are electrically separated either by air or by some form of a good insulating material such as waxed paper, mica, ceramic, plastic or some form of a liquid gel as used in electrolytic capacitors. The insulating layer between a capacitors plates is commonly called the Dielectric. Due to this insulating layer, DC current can not flow through the capacitor as it blocks it allowing instead a voltage to be present across the plates in the form of an electrical charge. The conductive metal plates of a capacitor can be either square, circular or rectangular, or they can be of a cylindrical or spherical shape… When used in a direct current or DC circuit, a capacitor charges up to its supply voltage but blocks the flow of current through it because the dielectric of a capacitor is non-conductive and basically an insulator. 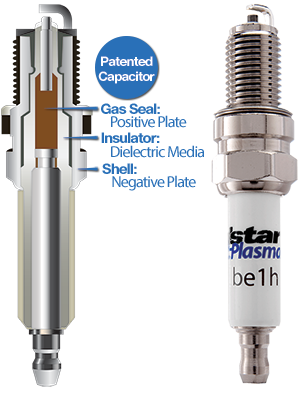 Dielectric Media (Insulator):
Repurposed by using high-purity, engineered, ceramic. Prevents energy from traveling between the two plates yet allows the shell to act as negative plate.