In 1986, Pulstar founder Lou Camilli moved to New Mexico to work as a consultant for the world-famous Sandia National Laboratories. Investigating the commercial potential of cutting-edge technologies, Lou began working with Sandia’s ultra-high power electrodynamics group. At the time, pulse power technology was being developed for use in high-speed rail projects–and even futuristic particle beam weapons (the “Star Wars” missile defense program). But Lou saw the potential for a different application: improving automotive ignition performance.

The oil crisis of the 1970s had woken people up to the unstable politics and economics of fossil fuel consumption. Along with growing public concern about air pollution, this was spurring automakers to explore strategies for making gasoline engines more efficient. Lou decided to come at the problem from a different direction: improving the combustion process by upgrading spark electrodynamics.

The basic idea–using a capacitor to deliver a high power spark to an ignition system–had been around for a long time. There were even some patents dating back to the 1920s, but so far nobody had managed to produce a device that was small enough, simple enough and cheap enough to make it commercially feasible to manufacture. As a result, spark plug technology had stalled out. “The automakers were still using the same basic technology introduced in the 19th century,” notes Lou. “Ignition systems and their circuitry were getting very advanced, but the spark plug itself remained essentially unchanged.”

Combining his passion for cars and entrepreneurial spirit with the expertise of Sandia’s scientists and engineers, Lou set to work trying to solve a problem that had eluded automakers for decades. Manipulating electricity to create plasma power, instead of the tiny spark produced by traditional spark plugs, would dramatically increase combustion efficiency. It just needed the right design and the right materials. “There was no ‘Aha!’ moment,” Lou explains. “Just lots of hard work and persistence. I knew it could work.”

Lou’s dogged determination paid off. During the years that followed, he was able first to design and patent an internal combustion engine capacitor that would survive underhood, then condense his capacitor into the footprint of a conventional spark plug. He has since continued to refine the technology, increasing durability and performance. The result: today’s Pulstar spark plugs, each of which contains a unique circuit that captures energy normally wasted, then generates a spark releasing 20,000 times more power than regular spark plugs.

From one man’s dream to your engine: that’s the Pulstar story.

Lou Camilli: The Man Behind Pulstar 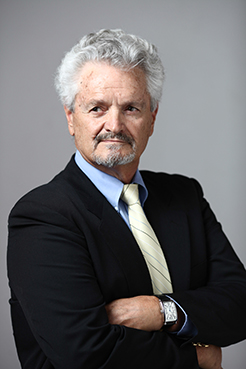 Lou Camilli, the inventor and developer of Pulstar® technology has had an amazingly varied career. After earning a degree in mathematics from Texas A&M, Lou spent four years as an infielder for the Cleveland Indians. He then left Major League baseball and made a name for himself creating historical replica firearms, some of which can today be found in museums around the world.

The big turning point for Lou came when, after working in finance as a syndicate manager for the Sage Group in Houston, Texas, he went to work at the Sandia National Laboratories. That’s when Lou fell in love with pulse power technology, and saw its potential for revolutionizing automotive engine performance and power.

One of the things that inspired Lou to explore that potential was his love for automobiles. Lou had always been a car guy. From his family’s Chevy Impala, to the Camaro he bought with cash as his first car, to the custom vehicles he loved to build and tinker with (favorites include a 1947 Willys Pickup-turned-stake bed, and a ’59 Volkswagen Bug with a Cosworth 2-liter mid-engine and bus transaxle) he simply loved jumping in the driver’s seat and hitting the road. “I won’t use cruise control,” Lou says. “It takes the fun out of driving!”

One positive aspect of Lou’s work on Pulstar technology has been its environmental impact. Even before the Pulstar spark plug had become a reality, Lou traveled to Mexico City to help tackle the challenge of reducing emissions from that city’s buses, which were contributing heavily to dangerous levels of smog. Just attaching Lou’s capacitor to existing spark plugs helped reduce emissions significantly, and Lou received an honorary doctorate from the Mexican Ecological Movement for his air quality work.

Today, Lou serves as president of Pulstar, LLC. He is as excited as anybody about the ongoing Pulstar story, and can’t wait to find out what happens next.